We started this project with the base idea of reading a book. My mindset wasn't very willing or interest. I didn't want to read it and had no interest in the past war incidences we had researched. However as I delved into my research my interest grew. I had an idea but I did not have the actual truth I want to show off. But the truth came to me as the art became more and more developed. I came to idea that we always wanted someone to come back. We all need something in our lives to go well. And who suffered more than the mothers who barely even got to say goodbye as their kids marched off to their deaths. This was my final idea, my third and final artist statement.

In my project one of my truths was the truth of a soldiers death. We put our dead soldiers honor ahead of that of the soldiers who returned home. This was a truth for me because we always dream of the idea of people coming back from war alive yet we have never thought about the idea of their mind is rest. Maybe, we have created the hope of their return for us, not them. Their friends died, yet we light a candle in the window to bring them back home, leave their friends, their brothers in arms behind.

In the end, this project was probably my favorite from the entire year. I put the most effort and my most time into it. However I would have to say, that the amount of time and effort I put in let me down. I failed myself. I feel as if I did not live up to how I wanted the message to be shown. I wish I had designed it better than I did. I want to be an artist but my art is absolutely terrible. In the future I hope to add more skill time and understanding into it. I want my art to make someone stop and think about it. 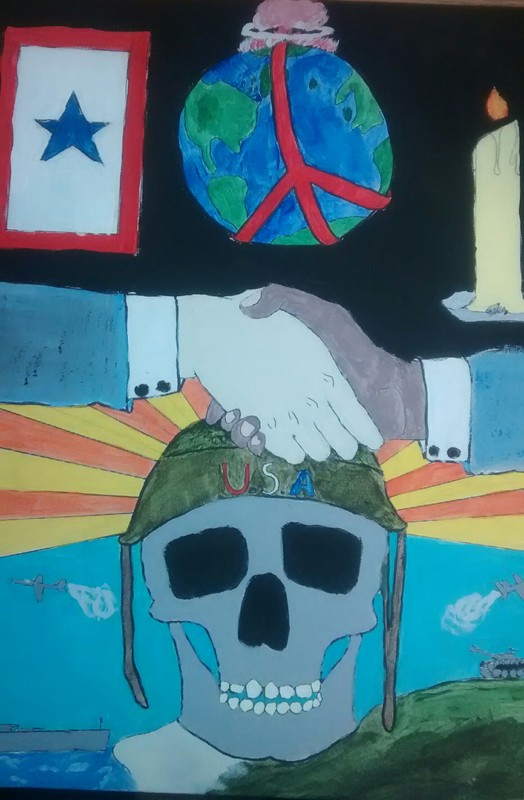 One thousand soldiers go to war and two hundred return. Yet the people who benefit the most are the men behind desks, the ones who never hold a gun to a man’s head. Yet somehow the soldier and his family is the one who has to carry the weight of coming home.

In the upper left, the blue star mother’s flag is hung in a house to show that you have a child in a battle zone. Each star portrays the life of a soldier who will someday come back. The government will send a letter with a golden star representing their child’s safe return home, or a black star representing his death in the line of duty. While the mothers wait, a candle is placed in the window, showing their hope for a safe return. If the soldier is killed, the candle will be placed on the dinner table, a light illuminating the table in memory of the man’s spirit.

I used the inversion of dark and light colors to portray the yin and yang aspects of war, that no matter how good or bad the cause of the war is, their is always an opposing side. The top shows hope and world peace, while a dark background and nuclear explosion shows that through all that, the world is still violent. Men shake hands to agree upon something, I placed this just above the skull in order to show them agreeing upon his death, as if his life was expendable. The skull is designed to portray the heroism of soldiers who have fallen in wars.

For this project I based my ideas behind it around the idea of peace, but the idea of peace was hard to portray through the horridness of war. I learned about multiple different ways in order to achieve peace. In the end I decided on a different idea of a soldier's peace of mind. I learned that the refinement of a statement will show the message behind an art piece.