This project began 2 months ago, we were given base ideas by Tina. The idea behind it all was to create a movie that showed what we learned in our DNA and genetic unit. This scared some people, because in the year before we had a movie project in our freshman year  physics class. The project was a disaster. Thus this project looked at first to be a repeat of last year. However we came up with the idea to make a single movie across the entire class. First we decided on what the main theme of the movie was going to be. We were given the idea of a few different genetic based movie already existed. Our classes choice, Gattaca. Gattaca tells the story of a young man not disgned to be genetically perfect. This caused him to be smarter, due to his lac of physical strength. The idea behind it is the genetically inferior are not accepted. We decided to put a spin on this plot line. Our story followed a young girl named Melody. Her name was derived from the French word maladie meaning sickness. She was placed in a home for the genetically disabled at a very young age. The goal of Melody is to see the outside world, however the biggest things shes ever seen is a mountain. Thus the idea of standing atop the world fills her mind, as she spends her days in the same routine until her nurse breaks it and takes her out into the world. That was the main story however we never even got past the fifth sense. Without a completed film, our movie was not as good as we had hoped to show at all school exhibition. Thus began our grand adventure to show our process instead of our movie. I believe this project was amazing, it put time into teamwork, story writing, set building, and filming. This is one of my favorite projects from the year. Thanks to Tina for putting this all together.

Over a River and Through the woods

This project was crazy, at first my group and I thought that we had to find original data, so we spent mutiple hours trying to group up and find data from the river. However after over two weeks of trying our teacher, Tina told us we just had to find data online. WOOO! That made things easyer, Peter, Brandon and I all grouped up and at least Luke told us he couldn't come so we excused him. However our other member Ben never even made an attempt to help or even show. We went through all of our data that we had found to see what was useful twords our resaerch as to how the cemical flow from Gold King Mine had affected the river. We tryed hard to find all the flows and regulations, and ended up finding that even though we were far behind we could still catch up and finish our project. I did feel that we were not rushed to the end goal at all and therefore I felt that we could produce a at least decent project with an ok infographic. My group was that of randomness and weirdness. We had one who couldn't make it, one who ahd no idea what we were doing, one who didn't care, one who never tryed and one who tryed for a good grade but then never put in his maximum effort. Thats what we call disjointed.
Through out this project we had to find how the fish poplutaion had changed due to heavy metals and acidic water quality. In the end we had found that for every 100 ft of water there are an average of 8 fish in the water. When the sludge hit thouse areas the fish population went down to 5, but a month later it was qt 9 and a month later it had plumitted to 3. The second plumit was due to winter setting in not the spills remaining toxic sediment at the bottom of the river. Lead was the most toxic metal, but it was one of the less showed minerals in the water.
In the future I do hope that some of this resarch could come usefull to another porject, but sense it is in our community it will most likely but null within a month. I wish that going into this project I had relized that we didn't have to go hands on. All though I do learn better when I work based in an area rather than a chair behind a desk. I tryed my best to keep my group going, we had too much time and we just could not get our crap together. We all procrastinated till the end of the earth, because it seemed that out of everyone in the entire class we got the group that couldn't care less. I did my best to find all the data working with Peter and Brandon but it ended up that our project was quiet lack luster and fairly full of typos. If I was given the option to redo this project I would not take the option, because that was two months of weird. 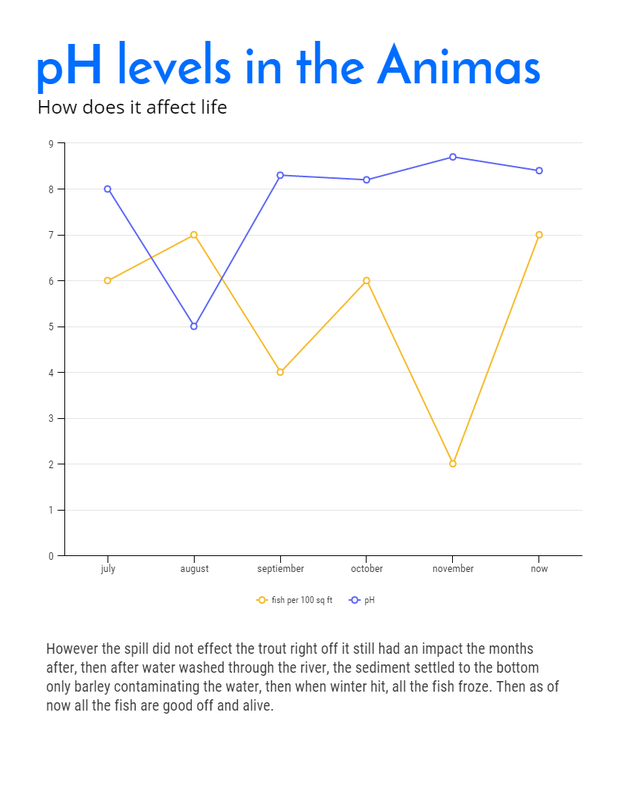