- What was your viewpoint regarding firearms, their uses and misuses, and legislation coming in to the project?
​I personally stood more neutral. My view was more conservative but I am more liberal by nature. I think that we have a violence issue in america not a gun problem, the amount of shootings in america would be reduced a lot if people looked to build connection not bank vaults filled for them alone. I also believe that in our society the gun system is a bit relaxed, the security needs to be increased. In other terms it would also be next to impossible to buy back every gun from America, because we are already so deep in debt.
- In what ways was that viewpoint challenged by our class conversations, your research, and the exhibition?
The class conversations to me felt pointless because at first it was one big one up, then we all agreed to just be neutral and nothing really changed across the class. I also felt that sense I needed to be neutral and I was in charge of legislation so I never found anything to change my mind.
- What adversity did you face during this project and how did you overcome it/make your way through it?
I chose to ignore adversity and instead just try and stick with the project even if I didn't find it useful at all I still powered through it. I found the project therefore very easy.
- In what ways did you contribute to your group and the class as a whole?
I found a major amount of my groups information on the legislation, and helped move the pallets and hang up sheets. I spent a lot more of my time helping in the commons than doing research however I did try and help my group out in every way possible. In the end I feel very content with my view point and still feel as if I contributed to the overall project without changing any major ideas.
- What can you point to in the exhibition that is yours (e.g. something you made, researched, etc.)
I made most of the design for the courtroom and was the one that made it look nice when people walked through it. I think I did a good job on it and I can say that I feel as if I made my own beautiful work for this project. I wish I had spent more time on the information involved with the room however I think that my goal to do the design and make it look nice was well kept. 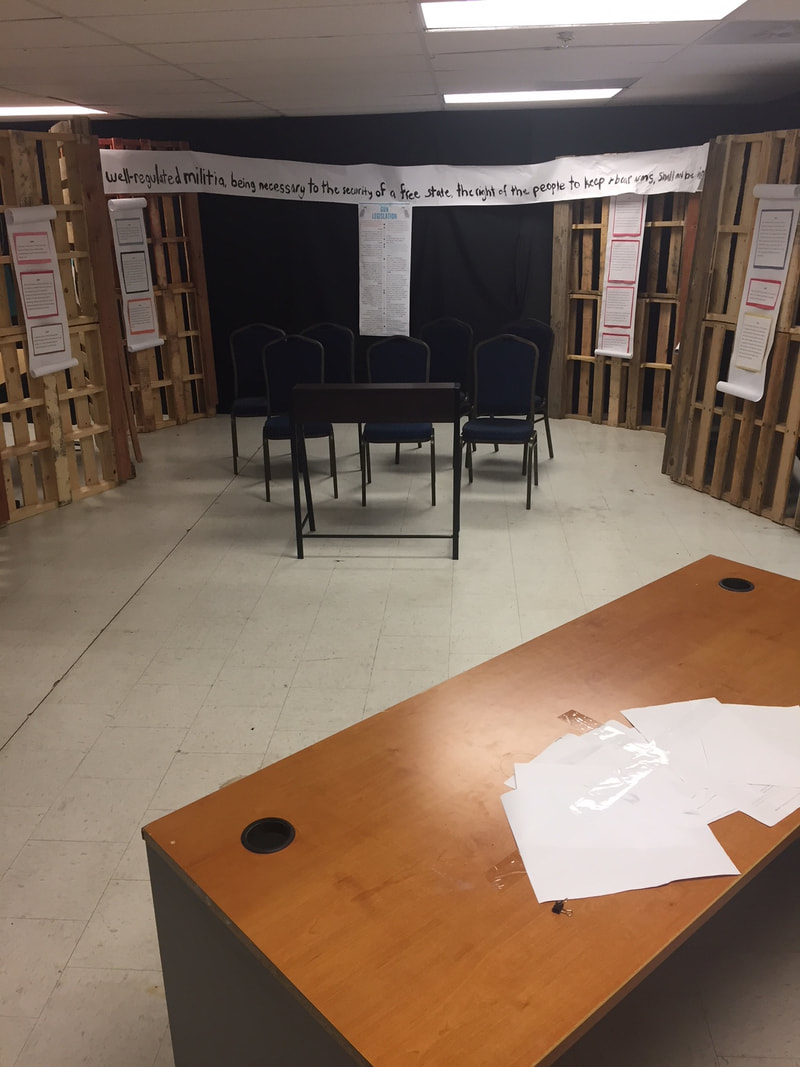 With Justice For All?

Person-able
I came from across the seas
With P-T-S-D
Nightmares and cries of the the past
They promised me glory
What about honor I asked
Instead I was ignored or harassed by everyone I meet
For sitting on this lonely street
The tone of birds still hum in my ears
RPGs and afternoon airstrikes
Stars glimmer in my eyes
They look purple yet unreachable
False advertisements and broken promises
They see me as a tool
Not a man
Thus I sit
Once the most capable
Upon walking off that plane I am seen as handicapped
No longer seen as person-able
I am a person
I am a man
I sit here sad
For I was gifted with nothing but betrayal
I walked in a proud young man
And left sulen for my brothers’ and sisters’ deaths
Across the sea
The P-T-S-D can not hurt me
Yet constant pain takes my mind
Back to the sandy dunes and sunny afternoons
In the back of a truck
Before it all went sideways
Just like the sidewalks
I was seen then
But I’m invisible now
The only way people will see me is if I make a scene
Then I am seen as angry, malicious, a rabid animal
But I am no such thing
So why do I watch the blurry faces of passersby
Why can I not receive a simple “Hello”
Or even “Goodbye”
Why have I seen thousands
And only spoken to hundreds
Why can I not be person-able 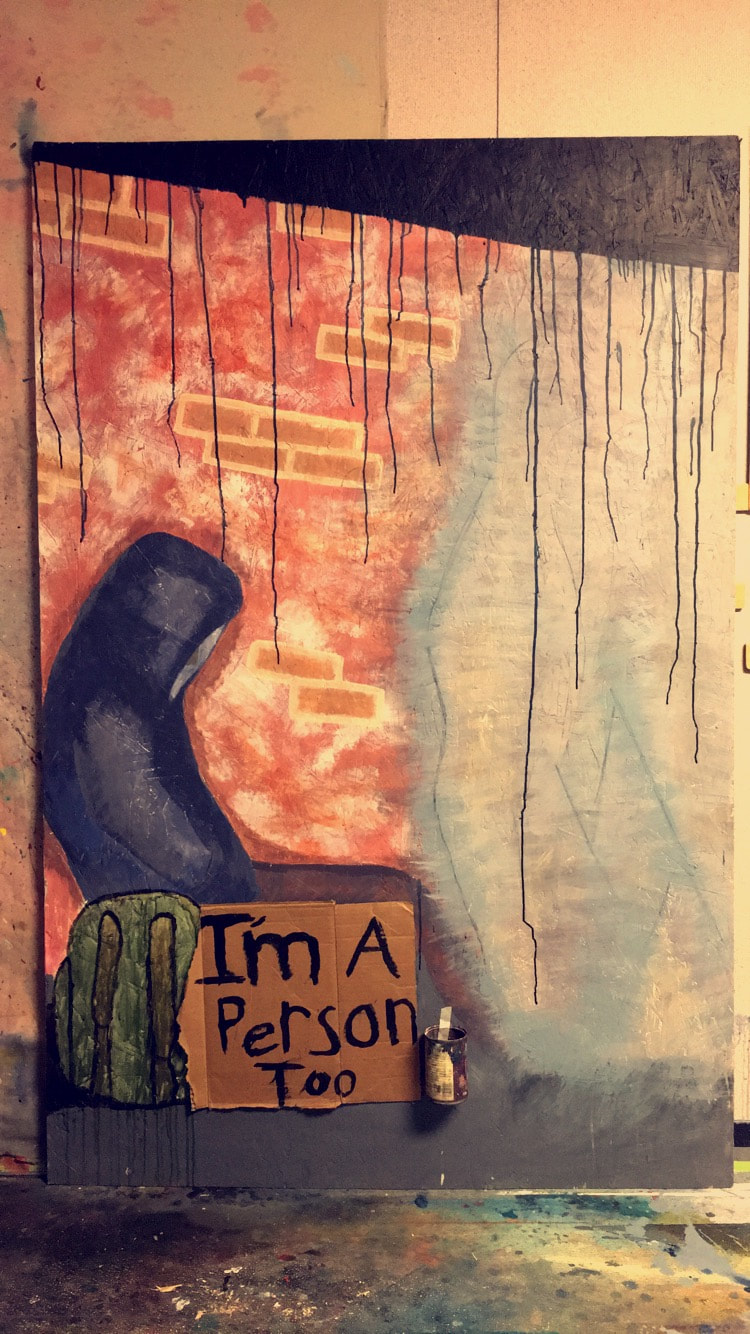 This project began in August of 2017, we studied sociology and the ideas of Martin Luther King Jr. to decide how we wanted our project to portray our ideas and passions. After months of research we decided to work in our community and find a large problem that needed to be addressed and dealt with. We decided to work with homelessness in our community and figure out how we can solve the divide. We spent time interviewing members of our community to formulate a deeper understanding of the people we were studding and creating a project around. We then split into groups and began art projects, videos, and writing pieces. From there we had a event planning comity. Then after 4 and a half months of research and work we began our exhibition.

Our exhibition took place at the Durango fairgrounds and had been advertised for almost a months by the time it began. We had parents of students bring in food and anything they were willing to give to the homeless community. We spent time talking with people about why we did this project and what we hoped people would take out of it. It kicked of with speeches from students and community members and then proceed into food and socialization. At the end Harley Farkas gave an amazing speech that addressed everyone.

My group did a large painting that portrayed what a homeless man felt while people walked past every day. It used dark colors to portray a sense of sadness. The people do not show any  personality because they never stopped to have any relation with the person. At the exhibition we had it probed up in the corner with 3D elements and a good position to show off our objective.

This project over all was very enjoyable and challenging. I think that it was very well designed and put together. I would encourage Ashley to do this every year and simply have separate topics around Durango. Thanks for putting together a great project.

Is it Morally Ethical to Punch a Nazi Seminar Reflection.

One idea expressed in this seminar was by Henry, and he asked if it would be ethical to punch someone who was protesting in the streets for black rights or gay marriage. To me this supplied a whole new idea that maybe the people we find to be disgusting because of their beliefs actually just want to express their ideas to the world, maybe they want to be recognized as someone to the world. The idea that we are on two sides of a spoken war that we both think were the good guys brings a whole new perspective to the ideals of this fight. A month ago I would have walked up to anyone waving a nazi flag and punched for it, but now I would rather sit and talk with them about why rather than just assuming they're a bad person. I feel glad and delighted that a lot of other people have the same ideals as me. I think that a lot of our group had the same idea which made it hard to have a discussion rather than an agreement.
However our group did have slight enough disagreements to create a seminar, and this was our ethical conclusion for this seminar. In order to have a justified intent to attack someone with a different belief you need to have a reason, such as, the person of separate opinion attacked you or someone you feel the need to defend, or the action you find it necessary only breaks an unjust law. As MLK said in his “Letter from a Birmingham prison” article, “I would be the first to advocate obeying just laws. One has not only a legal but a moral responsibility to obey just laws. Conversely, one has a moral responsibility to disobey unjust laws. I would agree with St. Augustine that ”an unjust law is no law at all.” This quote shows the moral responsibility to break an unjust law due to the fact that it may oppress minorities into subjugation, or place them into the justice system unfairly. Thus due to the common action of hate based groups such as Neo-Nazis or White nationalists, if the aggressor has broken a just law then they should be prosecuted by the law system, if you take action into your own hands then you stoop to their level.
If you are to punch a Nazi then you need to have proper cause. The simple act of them hating the group that you believe in is not enough. That can easily be ignored and passed off as their opinion, as americans they are entitled by the first amendment to have, “the right to express any opinions without censorship or restraint.” In turn they are not able to assault you due to what you believe. The act of assault is illegal and is never condoned by any law ever passed by government. However self defense is legal, so if you are attacked by a hate group then you have the right to retaliate and keep yourself from harm. This goes the same for anti-hate groups such as antifa. If they assault the Neo-Nazi groups then they are the ones breaking just laws and thus have the right to retaliate and fight back.
I do not personally believe that it is morally ethical to punch a Nazi due to their beliefs. If you have reasonable cause then your right is to defend yourself or the ones close to you. The biggest thing is to remember that even though they may have a hard outlook on life, they were not born to hate, they were raised that way. We all were born loving, then the harshness of living bears down upon us all, the love that we could so freely express before is lost with the cruelty of thought. One planet, one people will never be able to be achieved because we continue to disagree. When disagreeance is eradicated world peace will be possible, however that will never be possible while the human uncertainty remains.